Mr. Legg crafted and retailed his secret recipe pork sausage for a number of years in the downtown-Birmingham meat market, and eventually believed that he could share his Southern Style sausage seasoning with all of the United States. Thus, Legg's Old Plantation® Pork Sausage Seasoning was born.

In 1936, Mr. Charles W. Purvis was hired as an office employee at A.C. Legg, and over the next few years, he became the General Manager, purchased stock, and eventually acquired ownership of this company he loved and had helped establish.

This legacy of excellence and pride continues today, as A.C. Legg is still a family-owned business. Charles Purvis's sons, Jim and Charles, are currently CEO/President and Executive Vice President, respectively, and his grandchildren are actively serving within the company, as well.

Since 1936, Mr. Purvis's motto was, Education is something that, once attained, cannot be taken away, and this philosophy of educated excellence is what drives us to continually learn, adapt and grow in order to achieve the best results possible for our customers. 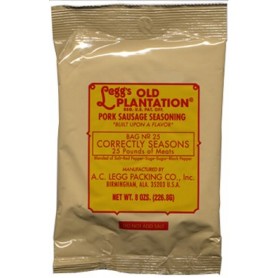 This blend is a true “Southern Style” pork sausage seasoning. It has a relatively high level of sage, red pepper and black pepper. Some of the red pepper is in the form of crushed red pepper so that it will be visible in the finished product.
Size: 8 Oz. bag  - correctly seasons 25 Lbs. of meat. 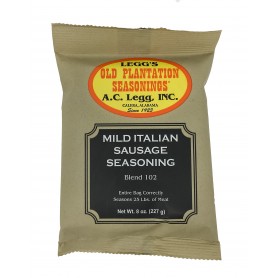 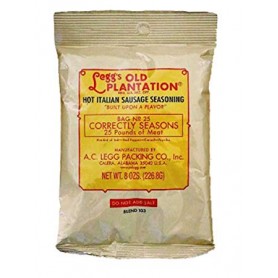 This blend contains some crushed red pepper to give Italian sausage produced with it that little extra zing.
Size: 8 Oz. bag  - correctly seasons 25 Lbs. of meat.