Nestled alongside the Cumberland Plateau of the Appalachian Mountains is the town of South Pittsburg, Tennessee (population 3,300). It was here that Joseph Lodge and his wife settled and, in 1896 opened his first foundry.

Originally named The Blacklock Foundry after Joseph Lodge's friend and minister, the company gained success until May 1910 when it burned down. Just three months later and a few blocks south, the company was reborn as Lodge Manufacturing Company.

Joseph Lodge created a legacy of quality that has thrived through two World Wars and the Great Depression and is still carried on by his family today. Both our CEO and Chairman are Joseph Lodge's great-grandsons who continue to evolve our product line and improve manufacturing methods. While many worthy competitors have fallen by the wayside, Lodge's dedication to quality, technology, and employees have helped it not only survive but flourish.

Lodge continues to develop the core line of seasoned cast iron, the introduction of complementary lines of cookware has seen great success over the past 2 decades. Lodge's diverse and colorful line of Porcelain Enameled Cast Iron has earned rave reviews from media and consumers since its inception in 2005, offering the performance of European brands at a much more affordable value. 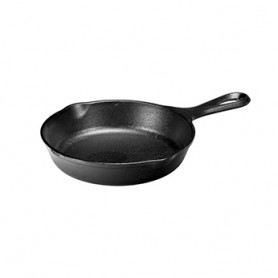 These skillets are multi-functional cookware the work wonder with slow-cooking recipes and all your favorite foods.   Cast iron loves a campfire, a stove top or an oven and can slow cook foods without scorching.  They retain heat well so you can sear meat at higher temperatures and keep your delicious meals worm for a long time.  Cast iron, like your grandmother used, still ranks as one of the best cooking utensils ever made.
Sauté, sear, fry, bake and stir-fry Pre-seasoned and ready to use Superior heat retention and even cooking Sturdy handle with hole to hang for storage Made in the USA 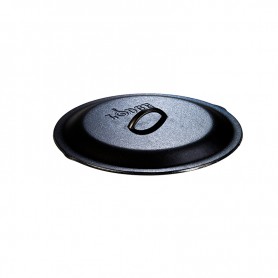 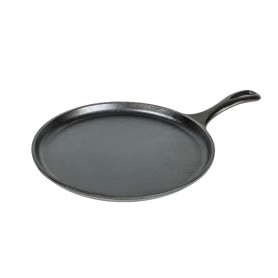 
The Lodge Cast Iron 10.5-inch Griddle is a multi-functional cookware that works wonders with all your favorite foods. This griddle is essential for big breakfasts, tortillas, quesadillas, roasted vegetables and grilled sandwiches. Cast iron loves a campfire, a stovetop, or an oven, and can slow-cook foods without scorching. It retains heat well so you can sear meat at higher temperatures and will keep your delicious meals warm for a long time.
10.5" Pre-seasoned cast iron griddle Unparalleled heat retention and even heating Low side walls and wider cooking surface Multi-functional cookware Made in the USA
"
Details View details 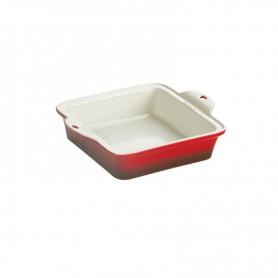 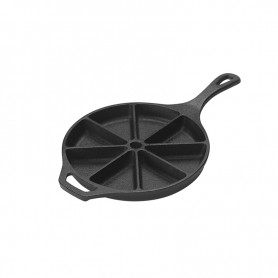 So you want to make perfect cornbread? Then this is the pan for you. Cast Iron is ideal for that perfect cornbread crust, not too thick, not too dark. Unique cooking properties of Cast Iron cook evenly without hot spots. The Lodge Cornbread pan is partitioned into eight sections for individual, ready to serve portions. This 9-inch pan features two handles for heavy lifting. Whether used in a kitchen or camp, theses virtually indestructible cookware should last for generations.
9" diameter wedge pan Eight (3.5" x 1") wedge sections  Pre-seasoned and ready to use 2 Looped side handles Hand wash Made in the USA
"
Details View details 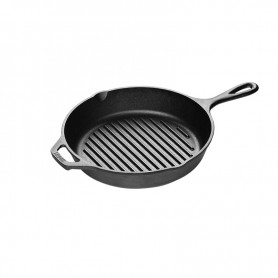 The Lodge Round 10.25 Inch Grill Pan is a wonderful addition to any kitchen or campsite. The deep ridges on the bottom of this heavy cast-iron skillet make it perfect for grilling steaks, chicken, hamburgers or even shrimp. The ridges help to sear the food while keeping it above the pan grease for lower fat cooking. Cast iron creates superior heat retention, browning your meat evening while leaving them moist and delicious. This grill pan features a heavy-duty handle with a notch that allows for hanging, and two side lips for pouring off grease or liquids.
Create restaurant quality grill marks Superior heat retention and even cooking Pre-seasoned and ready to use Hand wash Made in the USA
"
Details View details 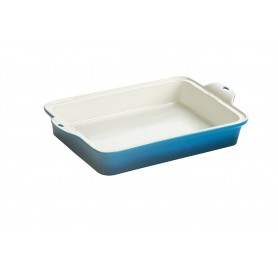 This 9 x 13 inch  dish is ideal for everything from standout side dishes to eye-catching entrées to delightful desserts. Use it to bake, serve, store and reheat meals. Oven safe up to 450-degrees F. Dishwasher and microwave safe but do not use on the stovetop.
All natural ceramic bakeware Bake, serve, store and reheat Oven safe up to 450° F Dishwasher Safe Microwave Safe Made in China
Details View details
Available In Multiple Sizes 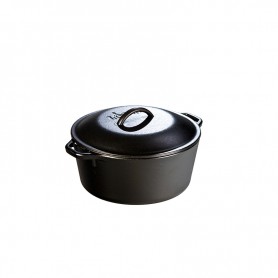 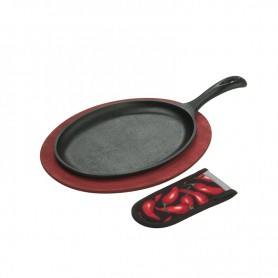 Add sizzling color to your fajitas at home with this Fajita set. Includes oval fajita griddle, red stained 1/2" routed wooden under liner, chili pepper hot handle mitt.  Under liner is 11-3/4 x 9 1/4. Griddle is 10 x 7 and is seasoned, ready to use.
10" x 7" Oval cast iron pan Red stained wood base Chili-pepper handle mitt Pre-seasoned and ready to use Hand wash with warm water Made in the USA 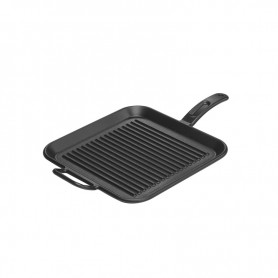 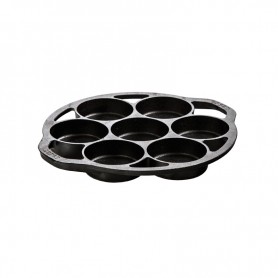 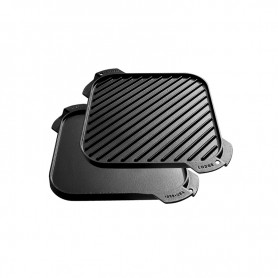 
The Lodge single burner reversible grill/griddle provides excellent heat retention and distribution. Two easy grip corner handles allow easy lifting, flipping or hanging when not in use.
Reversible cast iron grill / griddle Flat on one side, ribbed on the reverse side 2 Easy-grip corner handles for lifting, flipping and storage Pre-seasoned and ready to use Made in the USA
"
Details View details 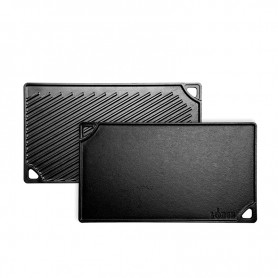 
What could be better than a reversible griddle? Meet the Lodge Reversible Grill & Griddle. The smooth side is great for making grilled cheese sandwiches as well as eggs and pancakes. The ribbed side is perfect for grilling foods such as steak, fish, chicken and hamburgers.
Pre-seasoned double-sided griddle / grill Brutally tough for decades of cooking Unparalleled in heat retention and even heating Use on the stove, on the grill or over the campfire Made in the USA
"
Details View details 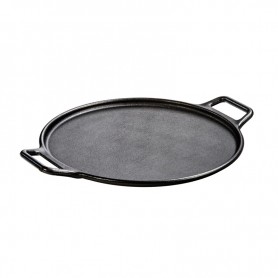 
The Lodge Cast Iron Baking Pan with loop handles is perfect for homemade pizza. Golden pizza crust every time. Great for roasted vegetables, pork chops, chicken and beef. Not even the most expensive stainless or aluminum cookware can rival the even heating, heat retention, versatility, and value.
14" Baking pan with loop handles Pre-seasoned and ready to use Unparalleled in heat retention and even heating Great for the oven, grill or over the campfire Made in the USA
"
Details View details
Available In Multiple Sizes 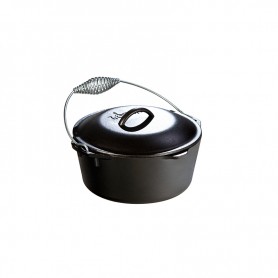 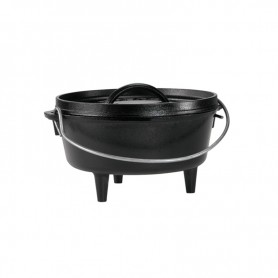 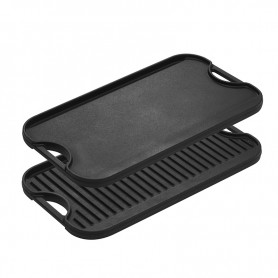 
The Grill/Griddle measures 20-inches x 10.44-inches with an actual cooking surface is 19.25-inch x 8.5-inch, serious enough to straddle either a campfire or two burners on your stovetop. The reversible feature, of this crowd-pleasing cooker, means you can use the smooth side for cooking flapjacks, eggs, and grilled cheese sandwiches, and the ridged grill side for hamburgers, steaks and sausages. A slight slope drains fat into a generous grease gutter, and the two loop-style handles provide safe transport.
Pre-seasoned double-sided griddle / grill Brutally tough for decades of cooking Unparalleled in heat retention and even heating Use on the stove, on the grill or over the campfire Made in the USA
"
Details View details
Available In Multiple Sizes 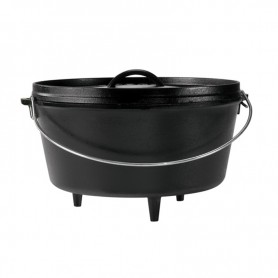 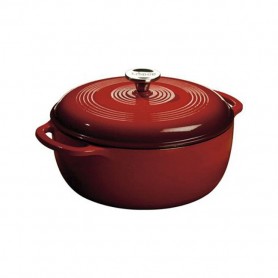 A flawless pairing of form and function that doesn't quit, the Lodge Dutch Oven is an enameled cast iron classic that's great for preparing and serving memorable meals.
Marinate, refrigerate, cook and serve Unparalleled heat retention for even cooking Smooth glass surface won't react to ingredients Broil, braise, bake or roast in oven up to 500° F Sauté, simmer or fry on any stove top Made in China 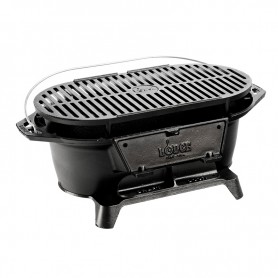 
This rugged, charcoal hibachi-style grill is perfect for picnics, tailgating, camping, or patio. The Lodge Cast Iron Sportsman's Grill features a draft door that regulates heat. Coals are accessible behind a flip-down door. Grill has two adjustable heights.
Rugged charcoal hibachi-style grill Pre-seasoned and ready to use Superior heat retention makes the most out of less charcoal Versatile size excels in the backyard, the backwoods or the ballgame Carrying handle and built-in shelf for utensils Made in the USA
"
Details View details
We take your privacy very seriously.
Our website complies with the
California Consumer Privacy Act (CCPA),
To learn more, please review our Privacy Policy and Terms of Use.
Accept
close
error_outline